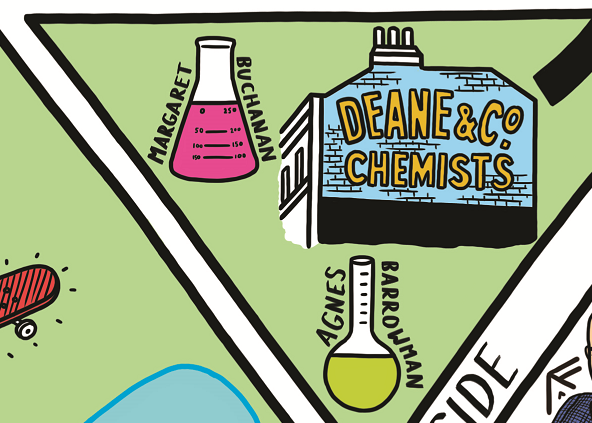 Henry Deane was born in Stratford in 1807 and opened a pharmacy at 17 The Pavement in late 1837. In 1841 he became one of the first members of the newly-founded Pharmaceutical Society.

After Henry’s death in 1874, his son succeeded him followed by another chemist, William P. Robinson, in 1885. Following a few years of poor business, it was bought by Agnes Borrowman – one of few female chemists at the time. She later paired up with Margaret E. Buchanan who managed the chemist and together they ran the business and a pharmaceutical school within the premises where they trained and employed only female chemists. The two women overcame many obstacles facing women at the time and Borrowman became the Pharmaceutical’s Society’s first female examiner in 1924. This chemist became one of the leading centres in the country.

Later in 1945 a V-2 bomb hit nearby and damaged the chemist and ‘175 houses and shops were damaged’. The store became and remained Deane & Co until 1986 when it closed.

Grade II Listed Status:
In 1981 it gained listed status. Comments referring to it’s substantial nature and presence considering it has been situated there since the early 19th Century. Mainly commenting on its brick arches and recessed sash windows and the ‘full width patterned cast iron balcony’. Interestingly also pointing out the modernity of the shop itself, for the time it was built with the ‘central doorway flanked by Ionic columns’.