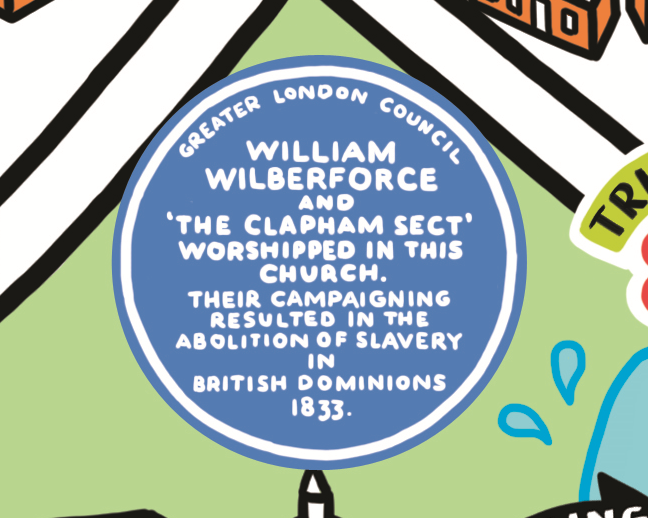 The Clapham Sect were a group of prominent and wealthy individuals who worshipped at Holy Trinity Church on Clapham Common at the end of the 18th Century. Under their influence Clapham became a centre of evangelism and they combined their efforts to exert pressure on the government. The group were credited with the foundation of several missionary and tract societies and were instrumental in the abolition of slavery.

Its members were chiefly prominent and wealthy evangelical Anglicans who shared common political goals concerning the liberation of slaves, the abolition of the slave trade and the reform of the penal system.

The group’s name originates from those attending Holy Trinity Church on Clapham Common, an area south-west of London then surrounded by fashionable villas. Henry Venn was curate at Holy Trinity (1754) and his son John became rector (1792-1813). Wilberforce and Henry Thornton, two of the group’s most influential leaders, resided nearby and many of the meetings were held in their houses.

They were supported by Beilby Porteus, Bishop of London, who sympathised with many of their aims. The term “Clapham Sect” was a later invention by James Stephen in an article of 1844 which celebrated and romanticised the work of these reformers. In their own time the group used no particular name, but they were lampooned by outsiders as “the saints”.

They founded Freetown in Sierra Leone, the first major British colony in Africa, whose purpose in Thomas Clarkson’s words was “the abolition of the slave trade, the civilisation of Africa, and the introduction of the gospel there”.

After many decades of work both in British society and in Parliament, the group saw their efforts rewarded with the final passage of the Slave Trade Act in 1807, banning the trade throughout the British Empire and, after many further years of campaigning, the total emancipation of British slaves with the passing of the Slavery Abolition Act in 1833. They also campaigned vigorously for Britain to use its influence to eradicate slavery throughout the world.