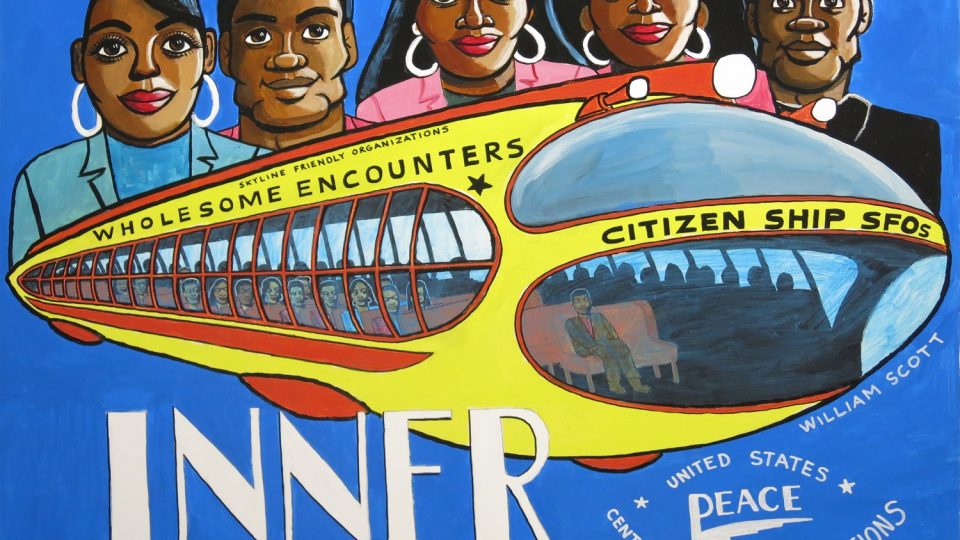 Studio Voltaire opens with the first solo exhibition of William Scott (b.1964, San Francisco) outside of the USA – the first significant survey of his 30–year practice. While deeply rooted in personal history, Scott’s paintings address wider questions of citizenship, community and cultural memory.

His portraits, predominantly of black figures, encompass African American political leaders, celebrities and pop icons, but also document members of his church, family, and residents of his native San Francisco. Scott’s practice at large reimagines the social topography of this rapidly gentrified city in works that combine architectural design with science fiction.

Scott’s paintings instead propose new utopian buildings, neighbourhoods and civic agencies that together describe his compelling desire for a more equitable society. Studio Voltaire is partnering with Creative Growth Art Center, a noted nonprofit serving artists with disabilities based in Oakland, California, to present this exhibition. Scott has practiced at Creative Growth since 1992. Further details about the exhibition will be announced in the coming months.

Studio Voltaire has also commissioned artists Anthea Hamilton and Joanne Tatham & Tom O’Sullivan to create a series of permanent installations for the building, providing opportunities for playful, unexpected and inspiring encounters with artworks embedded within and throughout the organisation.

Internationally renowned artist Anthea Hamilton (b. 1978, London), who is a long– term resident of the local area and previously a studio holder at Studio Voltaire, will create an artist’s garden for the site, her first–ever permanent work. This ambitious project, both an artwork and a garden, will form a new, welcoming public entrance to Studio Voltaire. Hamilton has responded to the architecture of the Victorian chapel gallery, and references walled kitchen gardens, the bold geometry of 1970s design, handcrafted folk art and vernacular architecture. Hamilton is interested in how the garden will be used and traversed by visitors, creating informal seating areas and a stagelike platform alongside a new pedestrian entrance, which will further open up the site and better connect the organisation to its surrounding neighbourhood.

Joanne Tatham and Tom O’Sullivan (b. 1971/1967, West Yorkshire/Norfolk) have been commissioned to produce an installation across Studio Voltaire’s public toilets. The Institute For The Magical Effect Of Actually Giving A Shit (a note to our future self) is the artists’ first–ever permanent commission, and includes bespoke, hand–glazed ceramic tiles which draw from Tatham and O’Sullivan’s key motifs, in particular staring, cartoon–like faces. Positioning their work within the context of a public toilet, the artists’ vibrantly coloured installation employs humour and the absurdity of the unexpected as a strategy for both disruption and generosity.

The capital project, the most ambitious transition in Studio Voltaire’s 26–year history, will significantly increase the amount and quality of support the organisation can offer to artists, as well as transforming how visitors experience their buildings and programmes, which will become more welcoming, porous and engaging.

The scheme will transform, what is in part a former tram shed and create 42% more artists’ studios providing affordable, high–quality spaces to 75 artists and directly address the current citywide shortage of artist’s workspace. Public spaces will increase by 233%, including the creation of a dedicated learning and events space, public garden, café, artists’ kitchen, sculpture workshop, and two onsite live/work spaces to house international residency programmes for the first time.