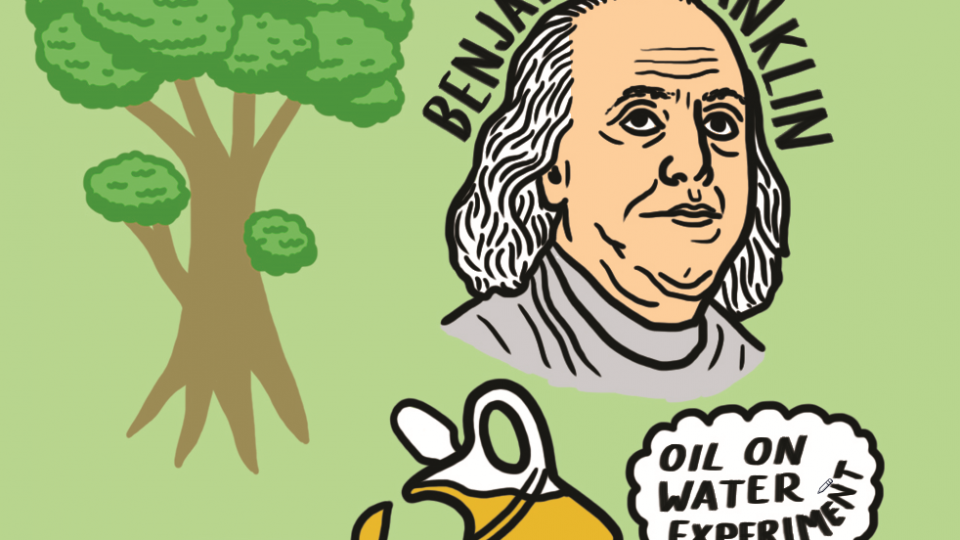 One of the Founding Fathers of the United States, Franklin was a leading author, politician, statesman and diplomat. He was also an outstanding experimental scientist and during the 1760s initiated his ‘oil on water’ experiments on the ponds of Clapham Common, an important moment in the study of surface chemistry.

Franklin earned the title of “The First American” for his early campaigning for colonial unity initially as an author and spokesman in London for several colonies. Franklin stayed in Clapham with his friend Mr Christopher Baldwin at The Grange on West Side (pulled down c. 1900). Baldwin was a resident at The Grange from 1762 to 1778, during which period the Franklin experiments must have been carried out.

During one of his many voyages across the Atlantic Ocean, Franklin observed that oil had a calming effect on waves when poured into rough ocean waters. Franklin went on to experiment with oil on water on mont pond on Clapham Common, spreading monomolecular films on various bodies of water, and ultimately devised a concept of particle repulsion that is indirectly related to the hydrophobic effect. His early observations inspired others to measure the dimensions of oil monolayers, which eventually led to the formulation of the contemporary lipid bilayer model of the cell membrane.

By 1776 Franklin was actively involved in framing the Declaration of Independence, and as a skilled negotiator he successfully won Britain’s recognition of U.S. Independence (1783) and from then on played an outstanding public role in the early history of the United States. .