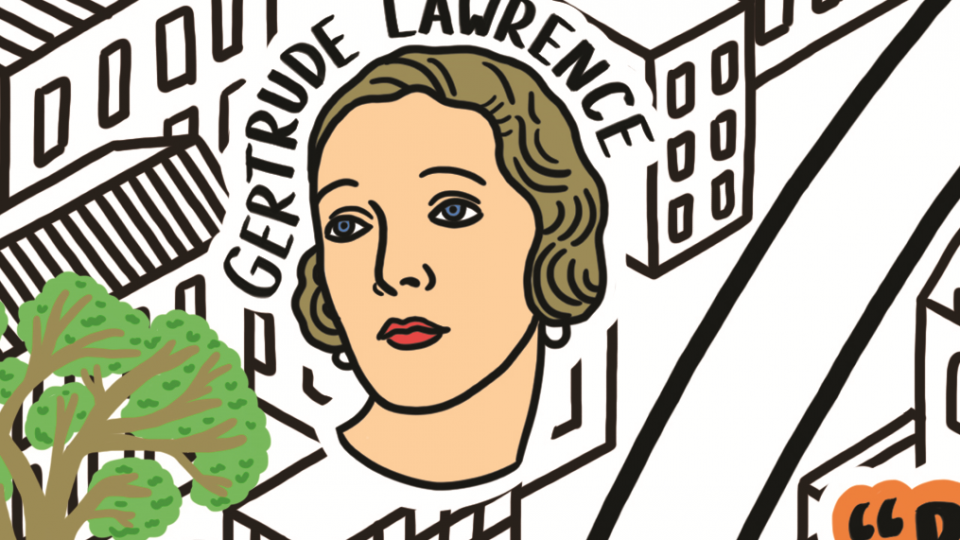 Gertrude Lawrence (4 July 1898 – 6 September 1952) was an English actress, singer, dancer and musical comedy performer known for her stage appearances in the West End of London and on Broadway in New York.

Gertrude was the first international superstar, a cockney who conquered adoring audiences on both sides of the Atlantic. She was the first to sing George Gershwin’s timeless hits Someone To Watch Over Me and Do-Do-Do, in his musical, Oh, Kay! Her incandescent star quality created the leading roles in Noel Coward’s Private Lives, Cole Porter’s Nymph Errant and Kurt Weill’s Lady In The Dark.

Gertrude Lawrence had come into theater in a roundabout way. She was born Gertrud Alexandra Dagmar Klasen in 1898. She became friends with another famous Clapham resident Noel  Coward. Coward, who first met her when she was 14, describes her face as ‘far from pretty, but tremendously alive’.

‘Without the greasepaint, she was quite plain – one reason, perhaps, why her success was confined to the stage and never repeated on screen. Yet, when the curtain went up, a strange metamorphosis occurred. Sometimes, in Private Lives, I would look at her across the stage and she would simply take my breath away,’ wrote Coward. Coward and Lawrence would work together throughout their respective careers.

Noel Coward maintained that Lawrence ‘quite untruthfully always insisted’ that as a child she gnawed kippers’ heads in the gutter. There were apparently few street corners in Clapham on which she had not claimed to dance barefoot to a barrel organ. According to Coward, this was ‘grotesque exaggeration’.