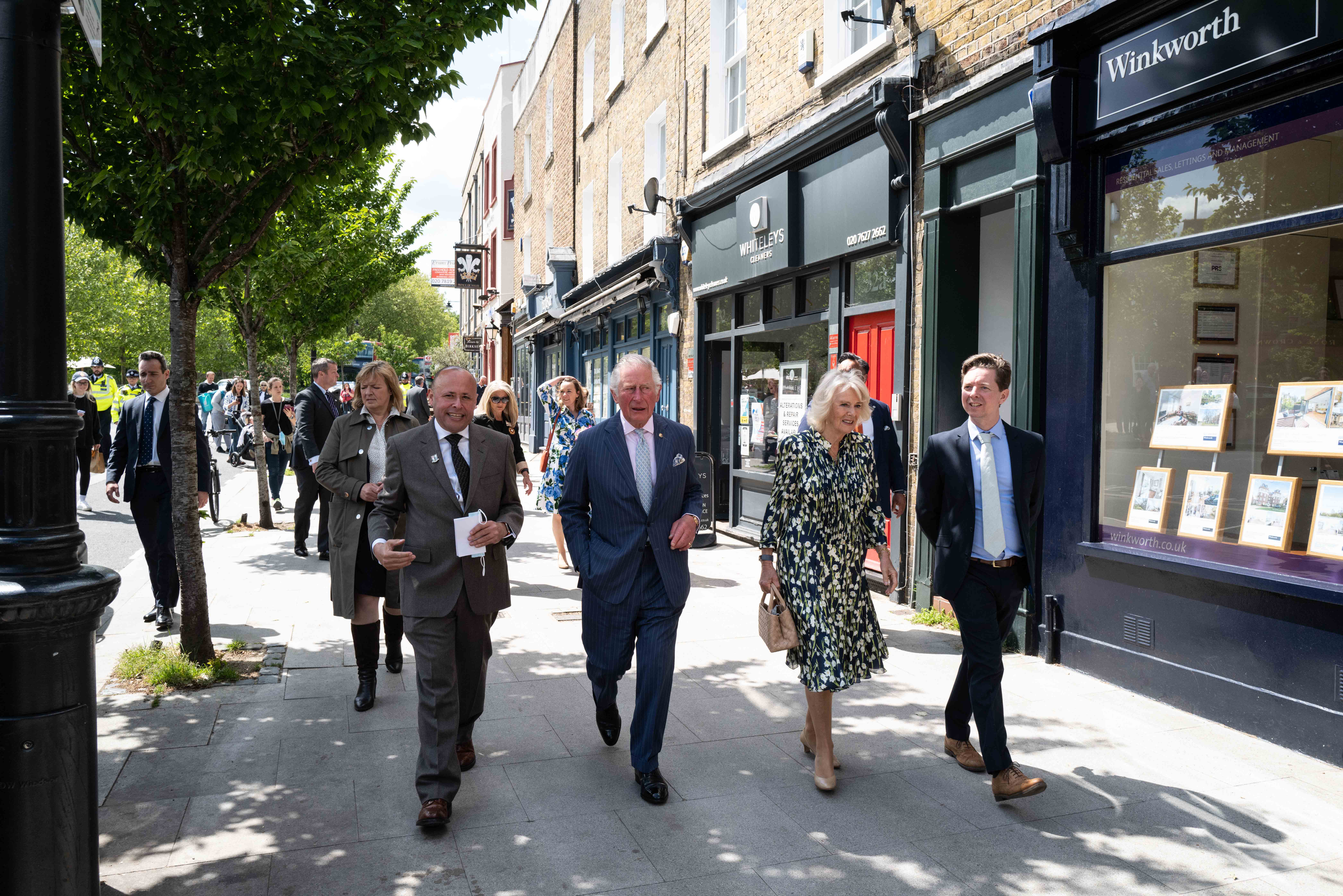 The Prince of Wales and The Duchess of Cornwall visited Clapham Old Town on May 27 to meet local business people and workers in the hospitality industry as Clapham looks to continue its recovery from the coronavirus lockdown.

The visit first saw Their Royal Highnesses join an outdoor reception at the Michelin Starred Trinity Restaurant. The Prince and The Duchess were greeted by guests including members of the Royal Academy of Culinary Arts, apprentices, chefs and trainee chefs.

The reception was held to mark the 40th anniversary of the Royal Academy of Culinary Arts, of which The Prince is a Patron. The Academy is the leading professional membership association of head chefs, head pastry chefs, restaurant managers and suppliers​.

Their visit then saw The Prince of Wales and The Duchess of Cornwall tour local shops with Jeremy Keates, Manager of This is Clapham BID and Clapham Town Councillor Christopher Wellbelove.

They started outside of the Omnibus Theatre where they met the cast, crew, staff members and local children who were in the building rehearsing and participating in their programme of events.

Their Royal Highnesses went on to visit local independent shops and businesses.  Their first visit was to Birksen Flowers owned by business partners Tim and Lisbeth. They opened the business in Clapham Old Town in 2007 and presented The Duchess with a posy of seasonal British flowers.

The next stop, unsurprisingly, was a visit to the Prince of Wales Pub where The Prince and The Duchess took up residence behind the bar and The Prince pulled and tasted a pint of Sambrooks Wandle Pale Ale.

Pub landlord Dermot has run the POW for the last five years following the passing of his partner Alex. Alex took on the lease in 1979 and decorated it with Object D’Art that he collected over many years on his travels around the world with the merchant navy. The Prince was quick to notice images of his father and grandfather as toby jugs behind the bar.

The Prince and The Duchess then stopped opposite a wildflower meadow planted by the This is Clapham BID where they spoke to Clapham BID gardener Oriana who looks after the planted areas in Old Town, by Clapham Common Tube Station and on Landor Road.

They also spoke to Dave Hanson, the Chair of the This is Clapham Business Improvement District and the Operations Director of Infernos nightclub about the reopening of the night time economy in June.

Simon Millson is the Chair of the Clapham Common Management Advisory Committee (CCMAC) and he discussed the committee’s role in increasing bio-diversity on the Common.

The Prince and The Duchess are keen environmentalists and took an interest in the greening work of the Clapham BID and CCMAC and were impressed with the wildflower meadow as a small intervention in the centre of an urban environment.

The next stop was to visit Rex and Wolfe pet shop and dog groomers, where The Prince and The Duchess were presented with dog toys by owner Gill Bennett for their Jack Russell terriers. According to Gill, the Boris Johnson dog toy is amongst their best sellers.

The penultimate stop was to visit barber Daniel and his customer, designer Tim Gosling at the traditional Old Town Barbers. Barbering has become a family tradition over the last twenty years, with his two brothers Marko and Milos also working in the sector. Daniel described his feeling after the visit as like “flying to the moon and back.”

The final visit was to the Clapham Fire Station where Their Royal Highnesses met the on duty watch alongside Lambeth Borough Commander Norman Perry and thanked the firefighters for their service.

The Royal couple were then able to meet and greet local residents as they made their way to their car.