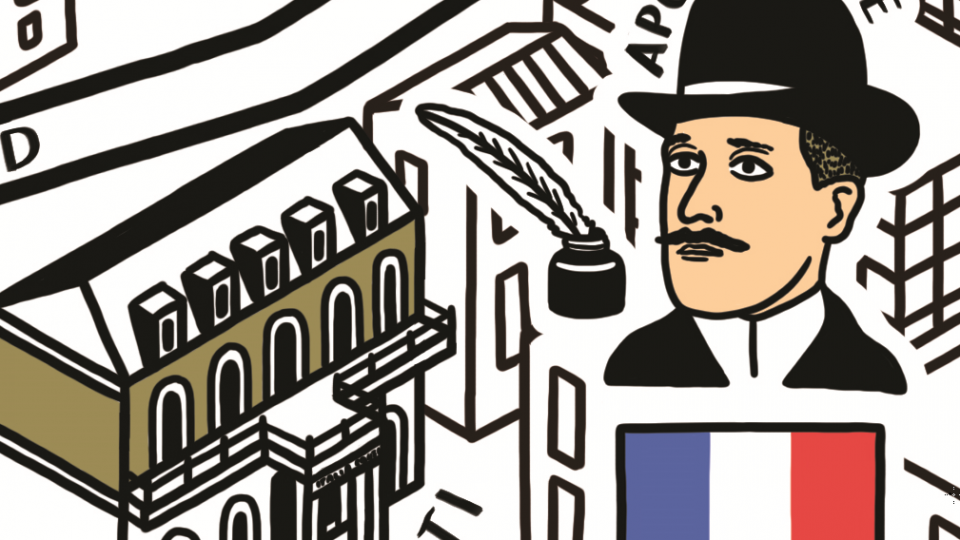 Apollinaire was a French poet, playwright, short story writer, novelist, and art critic and is considered one of the foremost literary figures of the early 20th century. His brief career influenced the development of such artistic movements as Futurism, Cubism, Dadaism, and Surrealism, and the legend of his personality—bohemian artist, raconteur, gourmand, soldier—became the model for avant-garde deportment.

His real name was Albert Włodzimierz Apolinary Kostrowicki and according to most sources,  was born in Rome in 1880, the illegitimate son of a Polish woman and an unidentified man—there is speculation that his father may have been an Italian military officer, a prelate, or even a cardinal in the Church.

In May 1904, Guillaume Apollinaire caught the boat-train from Paris-Saint Lazare to London Victoria, in a last attempt to win the love of a young Englishwoman named Annie Playden. For almost half a century, little was known about Annie except that she had been a governess in Germany where she had met Apollinaire and where she had turned down his proposal of marriage. She called her suitor by his real name,”Kostro”.

In 1951, an Apollinaire scholar tracked Annie down to New York. He discovered that she had lived in the United States ever since Apollinaire’s visit in 1904. Annie – now Mrs Postings – was indeed the emigrant of Landor Road, and revealed that she had left London in fear of Kostro’s jealousy and the violence it could bring on suddenly. She had been frightened in Germany when he proposed on a mountainside, inviting her to consider the steep drop before giving her response. And one evening he had come knocking at 75 Landor Road and threatened to break down the door when her parents forbade her to open it to him, the cumbersome Frenchman who made unlikely displays of “noble blood”. (In fact, his paternity was vague, and his mother was what was then known as an “adventuress”.) Annie had told Kostro she was leaving soon for America and then, feeling hemmed in by her own lie, had applied to an agency which arranged for her to take up a post of governess in California.

Half a century on Annie Playden Postings had no idea that Kostro had become Apollinaire, that he was widely regarded as the greatest French poet of the 20th century, and that he had written poems about their love affair. He composed a 13-line poem called “Annie” and a longer one, “L’Émigrant de Landor Road”, named after the street in which the Playden family lived in Clapham, of which the subject is a man who leaves for America in “the coat of a lord who died without paying”.

He also wrote “La Chanson du Mal-Aimé”, (“Song of the Poorly Loved”). The initial motivation for the poem came from Apollinaire’s love affair with Annie Playden . The poem opens in misty London, where Apollinaire was rebuffed by Annie in November, 1903, and closes the following June in Paris, where he returned with all hope lost in May, 1904. As the comparison between his love and the phoenix the poem revolves around Apollinaire’s efforts to resurrect his life after this unhappy love affair.

Two years after being wounded in the First World War, Apollinaire died in the Spanish Flu pandemic of 1918, he was 38.

The Emigrant from Landor Road