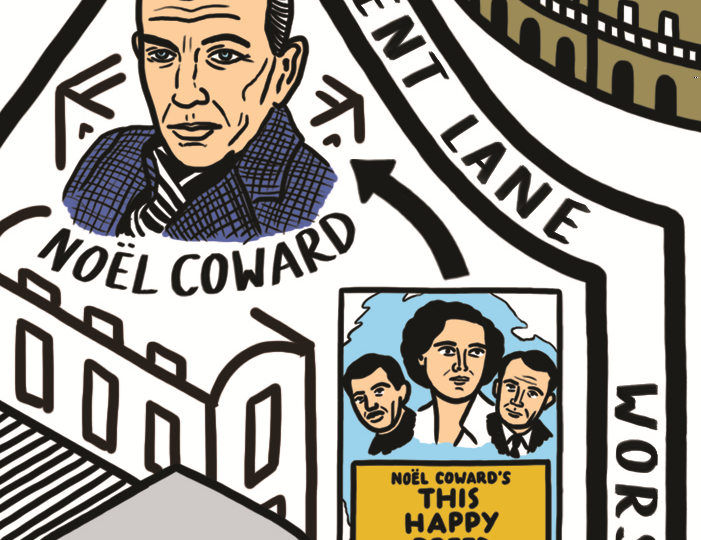 The actor and playright Noel Coward moved to Clapham in 1912, living at number 50 Clapham Common Southside with his family who rented the top two floors. Southside was a busy street and one of the first to boast an electric tram. Beyond the Plough Inn (now the Staine Street Syndicate) towards Clapham Road Coward describes how the ‘atmosphere became palpably commoner,’ but it was lively on Saturday night when the shops stayed open until midnight. In March 1915 he was ordained at Holy Trinity Church on Clapham Common.

This Happy Breed is a play and later a film by Noël Coward. It was written in 1939 but, because of the outbreak of World War II, it was not staged until 1942.

The story of the play concerns the working class Gibbons family who have just moved into 17 Sycamore Road in Clapham between the end of World War I and the outbreak of World War II. It anticipates the non-violent ways in which social justice issues might be incorporated into post-war national reconstruction, examines the personal trauma caused by the sudden death of sons and daughters and anticipates the forthcoming return of English men from the war.

It is also an intimate portrait of the economy and politics of Great Britain in the 1920s and 1930s (such as the General Strike of 1926), as well as showing the advances in technology and the impact they had on society.